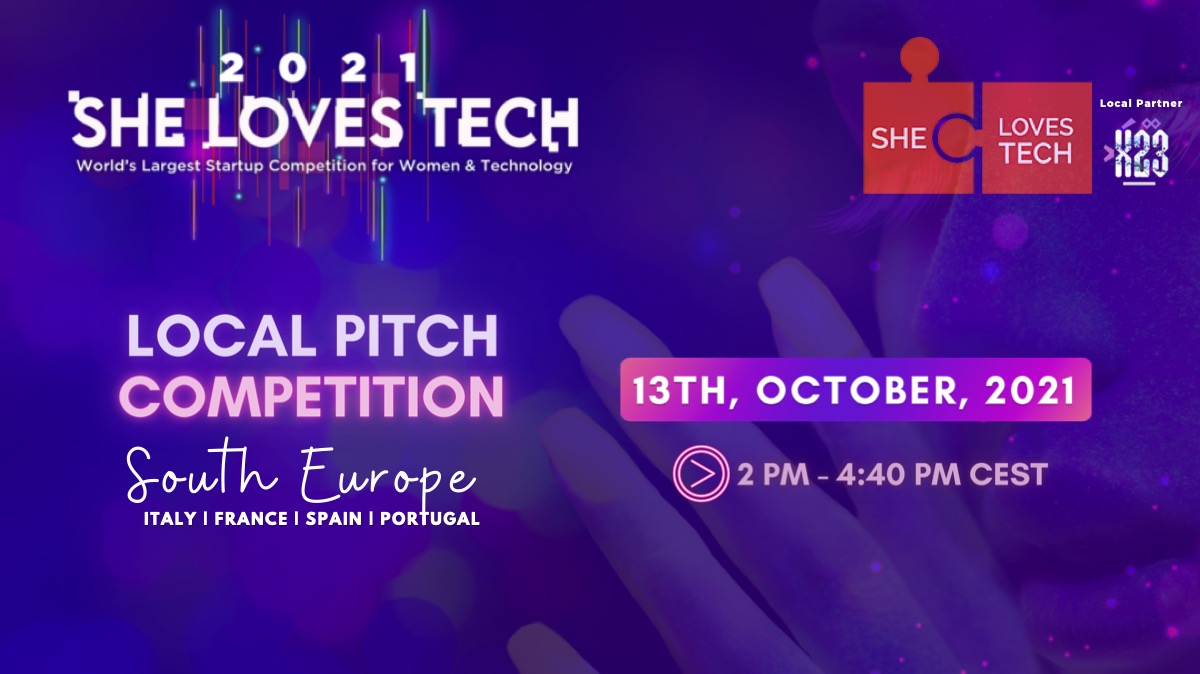 MILAN, 7-Oct-2021 — /EuropaWire/ — The first edition of She Loves Tech South Europe is entering its core in October. Since the beginning of June, after campaigning and engaging the South Europe startup ecosystem, the finalists are now called for the final pitching, to showcase their business to a wide public and to the panel of international judges from diverse yet professionally relevant fields! Only 1 out of the 12 finalists will be selected as Regional Winner and as South Europe representative to attend the Global Final Competition! The greatest competition tailored to women in tech – organised by X23 Srl and covering Italy, France, Spain, Portugal – has found its champions in South Europe (in alphabetical order):

he South Europe Champions will compete in the final pitch, an online event celebrated on 13th October, from 2:00 to 4:40 PM CEST via Zoom Webinar (agenda, CLICK). A few seats are still available to get to know the best women-in-tech-led startup to join the representatives from the other 40+ countries globally in the Final Global Event on 3-4 December, 2021.
The startups will be selected by a panel of international judges expert in the startup ecosystem, while the event will host the key-note speeches from international industry experts, startup mentors and community builders, such as:

Ready to discover the next top South Europe Women in Tech winner?
Don’t miss your chance and REGISTER NOW!

Sesame allows users to lock and unlock their doors using the Sesame app on their smartphones. It is the only smart lock that syncs the movement of the lock with the phone, providing exact control of the angle to which the lock turns.

Gu is a mechanical engineering master candidate from Stanford University. Originally from Taiwan, Gu is someone who usually thinks outside the box. Disruptor, troublemaker, entrepreneur, as he calls himself.

“There has got to be smarter ways to live our life,” Gu said.

Gu said he got the idea for smart lock due to his experience living in Asia where technology is relatively less developed.

With five-patented design, Sesame works with just about any deadbolt in the world. Users can install it in seconds, without replacing existing lock or removing anything. Current model is optimized for US/Canada/northern Europe Markets.

CANDY HOUSE also offers optional access point, which connects Sesame to the Internet when plugged into any nearby outlet. It lets users control Sesame wherever they are.

With Internet connection capability, users can allow guests in remotely. They can also control who has access and when. To ensure safety, the Sesame app also sends out a notification whenever the door opens or closes.

About CANDY HOUSE
Founded and developed by Stanford University students, CANDY HOUSE, Inc. is a candy store that sells dreams, putting the joy and surprise of innovative technology in the hands of consumers, just like candy. It is also a design house, developing and manufacturing products that inspire a minimal lifestyle. It launched its first product – Sesame, the world’s first instant smart lock – in February 2015. For more information about CANDY HOUSE, Inc., visit the site online or follow it on Facebook or Twitter.